Please note that masks are still required in all Blue Ridge Cancer Care offices regardless of vaccination status.
Learn more about this and other current Covid-19 policies. 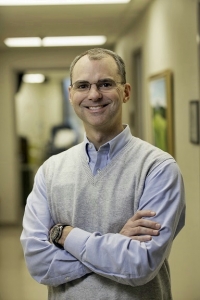 Dr. John Rogers grew up in New Orleans, Louisiana, and then attended Hobart College in Geneva, New York. After earning his bachelor’s degree in physics, he attended medical school at the Louisiana State University School of Medicine. Dr. Rogers did internship in internal medicine at the Ochsner Foundation Hospital and Clinic in New Orleans.  He completed his residency in radiation oncology at Wake Forest University Baptist Medical Center in Winston-Salem, North Carolina, where he also served as chief resident. Dr. Rogers participated in basic science and clinical research related to multiple cancer sites with results published in several journals. He received board certification in radiation oncology in 2006 and recertification in 2016.

Dr. Rogers is also a pilot and has served in the US Air Force since 1999. He continues to actively serve with the Air National Guard.